Westbrook rolls as the Wildcats defeat Borden County 44-30 for the first time since 2004 and on the road no less.  I knew this game would be a good one, and it didn’t disappoint as the game was tied heading into the final quarter 24-24.   Westbrook pulled ahead and maintained their lead with pressure from Borden County right down to the final minute. After a Coyote touchdown pulled the game within eight points and facing a 4th and long, the Wildcats connected on a long TD pass and catch that secured the victory.  Westbrook will attempt to make it a 3-0 start to the season for the first time since 2010 as they will entertain a solid Loraine squad this week.

In a battle between two ranked D1 programs, Sterling City held off May 44-40 as the Tigers rallied late to put a scare into the Eagles.  SC is now 2-0 with both wins being over perennial six-man power houses.  However, there is no time to pump the breaks as next up will be O’Donnell, who under second year head coach and former state champion player at Borden County, Fernando Baeza, have also jumped out to a 2-0 start with wins over six-man royalty in Gordon and Garden City.  For sure this will be a game to keep checking twitter for updates in week 3.

In a highly anticipated game between highly ranked D1 teams,  Rankin weathered the early storm inflicted by the White Deer Bucks and pulled away as the game went on to win comfortably 73-34.  Rankin adds this victory over a tough opponent to that of last weeks over Balmorhea and will seek to tack on another in a 2019 quarter-final playoff game rematch with Borden County this week.

Leakey easily defeated Eden in a match-up between two of the best teams in D1, Region 4.  The Eagles held the Bulldogs’ high powered offense to just 14 points winning 64-14.

Other top ranked teams jumping out to a 2-0 start: Jonesboro, Jayton and Grandfalls-Royalty all notched wins over their opponents and can be expected to climb up the rankings as a result.

Miami (2-0) with new head coach Clint Linman gets a win from Linman’s former team and state runner-up McLean 40-24 for the Warriors first win over the Tigers since 2012.

Abbott beats Milford in a low scoring affair 34-14 to jump out to a 2-0 start for the first time since 2014.  The Panthers will look to extend the win streak against Covington (0-1) this week. The last time Abbott was 3-0 to start a season was back in 2011.

Sidney is now 2-0 as they squeaked out the win 30-28 over Gorman.  This week the Eagles will travel to Cherokee for a shot at their first 3-0 start to a season since 2012.

Springlake-Earth is now 2-0 in their first season playing six-man after an easy 48-0 win over Hart.  The next three weeks will test the upstart program as they will face off with Happy, O’Donnell, and then White Deer.

Similarly, Irion County moved to 2-0 with their win over Robert Lee.  The Hornets have outscored their opponents 121-8.

Another new kid on the six-man block in Wildorado is also 2-0 after defeating Patton Springs 45-0.  Next up will be Cotton Center for a chance at be 3-0 in their first season of official UIL competition.

Turning some heads with the start to their seasons… Benjamin, Hedley, Santa Anna, and Kress all jumped out to a 2-0 start with victories in the respective week 2 games. 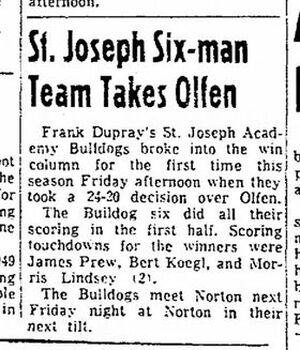 Here are a few others that caught my eye:  Sidney shocked Zephyr 48-0 their first shutout win over Zephyr since 1995; O’Donnell powered past Gordon 60-36 in another surprising score; and the Happy Cowboys upset a highly ranked D2 Groom Tigers in dominant fashion up in the panhandle by inflicting the mercy rule 68-20.

Hotly contested games were also a feature on the 80x40s last night
I am usually hesitant to make the claim that a school accomplished their (fill in the blank) “first ever in school history” as when it comes to Texas high school football you may have over 100 years of past history for any given school to fact check first things against.  However, I think Springlake-Earth did make school history by winning their first ever six-man football game last night by beating a very solid Whitharral team 58-42.  It’s possible Springlake-Earth played a six-man game that has fallen off the radar in the late 1930s or 1940s as the game was very popular and played by a ton of schools then with record keeping lacking, but I have yet to find a six-man score for the Wolverines from that time period…. so congrats, and welcome to six-man!

Along those same lines… It has been reported that Olfen played their first ever football game yesterday when they lost to Mullin 64-0. While it was an important game for the Olfen Mustangs as they enter into a season with a full varsity schedule as part of an UIL district, it was not their first ever football game. Olfen actually played some six-man football games for at least 3 years in the 1940s, for sure playing games against St Joseph’s Academy of Abilene in 1947, 48, and 1949. Even so, they were not a part of an official UIL football district so this season will be a historic one in that regard. Here is an article from the Abilene Reporter News from 10/29/1949 recapping one of those games: (note: I believe Olfen school only offered one or two grades of high school at this time before students went to other schools to finish HS. However, their football teams would still be considered varsity teams as it was their only team and they played Saint Joseph Academy’s varsity team. Some more research is needed, but it is clear Olfen played some varsity football in the 1940s).

A few games are on the docket tonight, but I think given all the hoops that everyone has had to jump through to get to this point I am glad we have had some semblance of normal this week and were able to escape our crazy world for a few hours to enjoy some high school football.  Just remember be reasonable and respectful to one another in your travels.